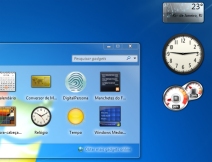 In the software industry, “Gadget” refers to computer programs that provide services without needing an independent application to be launched for each one, but instead run in an environment that manages multiple gadgets. Gadget is an portable application software, which is diagnosis the Laptop, Desktop computer system.

There are several implementations based on existing software development techniques, like JavaScript, form input, and various image formats. There has different gadget such as Google Desktop, Google Gadgets, Microsoft Gadgets, and Dashboard software Apple Widgets.